IRS Extended Additional Deadlines for Individuals Taxpayers Until May 17

Not All Tax Paid in France Is Eligible for U.S. Income Tax Purposes

If you ever took the SATs, you should be fairly familiar with analogies. If we were to ask - which of these does NOT apply.

Unlike the first three choices which are all synonymous with France, in the eyes of the IRS the 4th is not fully true. For U.S. Citizens & Green Card holders in France, what seems like high tax in French is mostly social contributions & not available for deduction as foreign tax credit.  How can it be that you pay 60+% in tax, but the IRS does not recognize it as such?

Focus on Residence - Not Nationality

The above discussion on CSG and the qualification for deduction of Social Contributions depends on the country of residence, not on the nationality of the taxpayer.

If, you are French, but not a resident of France and you live in a country that does not have a Social Security agreement with the US, then you can claim the social contributions made to your country of residence or to France as a foreign tax credit in the US - because your country does not have an agreement. If you live in the US, then you may claim exemption from CSG-CRDS in France based on the agreement between the US and France. You are only required to make the social contributions to one country. By default, this is the country where you live, not the country were you derive income as a nonresident.

French residents with assets in excess of €1,300,0000 face an additional “wealth tax” - known as ISF.  For U.S. tax purposes, this tax is not allowed as a foreign tax credit but can be deducted as a part of itemized deductions on U.S. tax returns.

This is the only part of French tax allowed for the Foreign Tax Credit on US tax return.

There are five tax rates and bands on net taxable income, as follows: 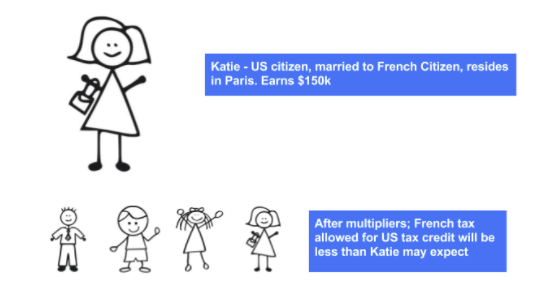 The amount of taxable income, or "revenu fiscal de référence" (RFR), is not equal to the income received by the household in the year. Instead, the RFR is determined by dividing the income by the number of "parts" in the fiscal household (1 part for every adult, 0.5 parts for each of the first two child, and 1 part for each successive child), and then diminished further by a standard deduction and any other deductions the taxpayer may have claimed in the year.

Thus, “Income share” is determined on net taxable income, after multiple deductions allowed in France - yet disregarded in the US.

As a result, cumulative Income and Social Security tax rates on income of $100K is 44%, while the effective income tax rate allowed for the foreign tax credit is only 20% - one of the lowest in the world. 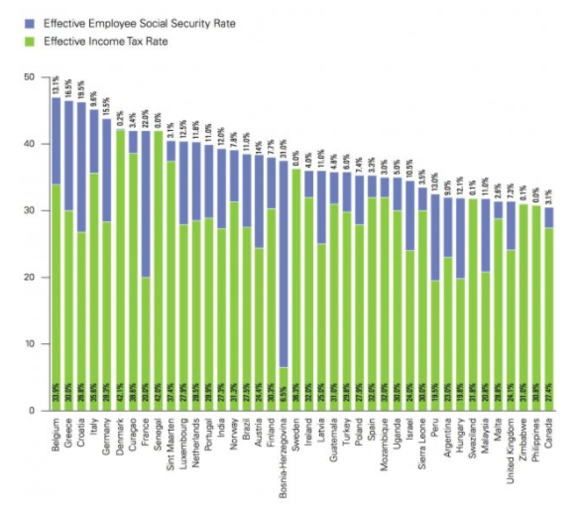