Form 1098 - Mortgage Interest Statement. Understanding Form You Might Need for Your US Tax Return 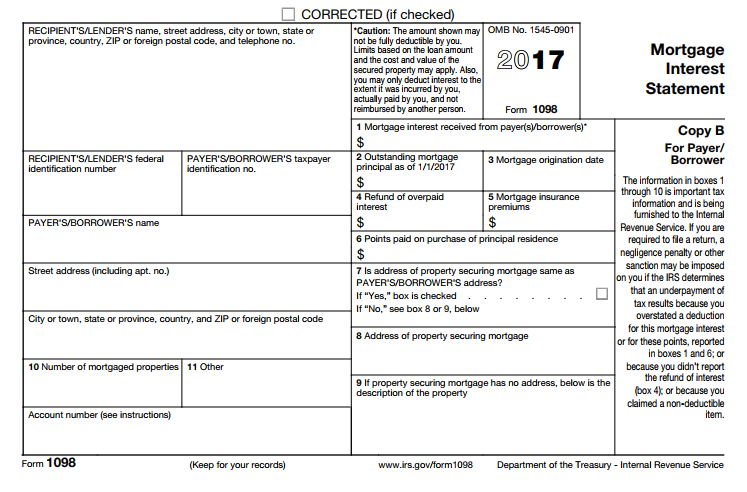 There is most likely a tax form tower sitting on the desk, or probably just thrown on your kitchen counter - forms from banks, lenders, employers, stockbrokers, and many others. For some people, the forms will just be handed over to your tax preparer; for others, you will take the information from the forms and input it into your favorite tax software - perhaps even uttering a few four-letter words as you go. Regardless of how you intend to complete your taxes, you probably don’t know all the details about what the many letters, numbers, and other data printed on the forms mean. This is one of several posts that will change that, and help you start to understand the multitude of tax forms.

Mortgage interest and points of at least USD 600 paid to the mortgage lender is reported on Form 1098, Mortgage Interest Statement.

From the standpoint of federal taxes, mortgages are defined as loans that are secured by either your primary home or a second home. Included in the definition are both first mortgages as well as second mortgages, as well as refinanced mortgages and home equity lines of credit and loans. Homes must have basic living amenities, including cooking facilities, toilets, and sleeping areas; but, in addition to a regular house, they can be condos, mobile homes, cooperatives, boats, or a similar kind of property. So, not only does the traditional ranch count, so do mobile homes, yachts, yurts, or that vacation house.

Rules for mortgages apply to both the primary home, and any second home. There is a limit to the value of debt allowed to be claimed. The total mortgage debt that can be claimed on the interest deduction associated with both the primary home and the second home can’t be greater than USD 1,000,000 (for couples filing separately, the limit is USD 500,000) - even if interest was paid on more debt than that. There are a few exceptions for debt that is grandfathered, and you can increase the number with qualifying debt from a home equity loan.

There is a catch. You are entitled to claim all qualifying mortgage interest assuming you meet all the requirements, but it is possible that you will not have received a 1098 form for all of it. Lenders are required by the IRS to issue Form 1098s if the mortgage is secured by real property (defined as “land and generally anything built on it, growing on it, or attached to the land”). If real property does not secure the mortgage, then the lender does not have a requirement to send you Form 1098.

Also, if the mortgage was obtained by a trust, partnership, estate, corporation, association, or a company (except sole proprietors), you may not get a 1098 although you might be the payer or co-borrower.

If the lender is required to send you a 1098, it will appear like this sample:

Form 1098 has three copies. The lender will provide Copy A to the Internal Revenue Service. Copy B will be sent to you, and you might also get Copy C (which has the same information as Copy B) to keep in your records.

The left of the form contains your personal information. Either your full Social Security Number (SSN), or perhaps only the last couple digits, is likely to be printed there as well. Although your full SSN is required for some other forms, such as the W-2, on the Form 1098 the first few digits may be eliminated to help protect your privacy. Regardless of what is printed on the form, the lender sends your complete Social Security Number with Copy A when it is sent to the IRS.

Box 1 contains the number most people care about. This box reports the amount of mortgage interest you paid to the lender. Mortgage interest that you prepaid may also be included in this box. The tax code is not built to accommodate advanced payments, so in some cases you may not be eligible for a deduction from paying ahead. If the numbers do not seem to add up, or you are not sure about the situation, double check with the lender. If all the interest paid on the mortgage is eligible to be deducted, the amount in Box 1 would be entered on Schedule A. Since it must go on Schedule A, that means you have to itemize deductions if you want to deduct mortgage interest.

Some people might also be eligible to deduct any points paid. Points are a type of interest that is often paid to get a better rate on the mortgage, or as a condition of obtaining the mortgage. Not all points must be reported by the lender, but those that must be reported will be in Box 2 on the Form 1098. Generally, a homeowner is not allowed to deduct all of the points paid in the same year they were paid - they usually must be deducted over the entire life of the mortgage. But, if all the following requirements are met, they can be deducted in the same year they were paid:

This is as confusing as it sounds. If you believe you can deduct points, but are not sure about whether or not you qualify, you should consult with a tax professional.

If the lender credited an overpayment of interest from a prior year, or gave any kind of refund, it will be reported in the Box 3 amount. If there is an amount in Box 3, it isn’t deductible - and you may actually have to report it as income on your tax return.

The box is for miscellaneous information for your use, but that is not usually sent to the IRS. As an example, the lender might report property taxes paid in Box 4 if you have an escrow account. Remember the amount you paid into escrow for taxes is not likely to be the same as the value of taxes actually paid - and you can only deduct the actual amount.

Box 5 has been “reserved” for several years, but will be removed completely starting with the 2016 tax year.

As a matter of fact, not only will Box 5 change, but the whole form will be different starting with the 2016 tax year. You will notice on your 2017 Form 1098 that there are extra boxes. These boxes will report the outstanding principal on the mortgage, when the mortgage was originated, and the address of the property that secures the mortgage.

You should receive your 1098 before February 1. Check with your lender if you have not received it by then.

For information on other relevant tax forms, look for other articles in this series.